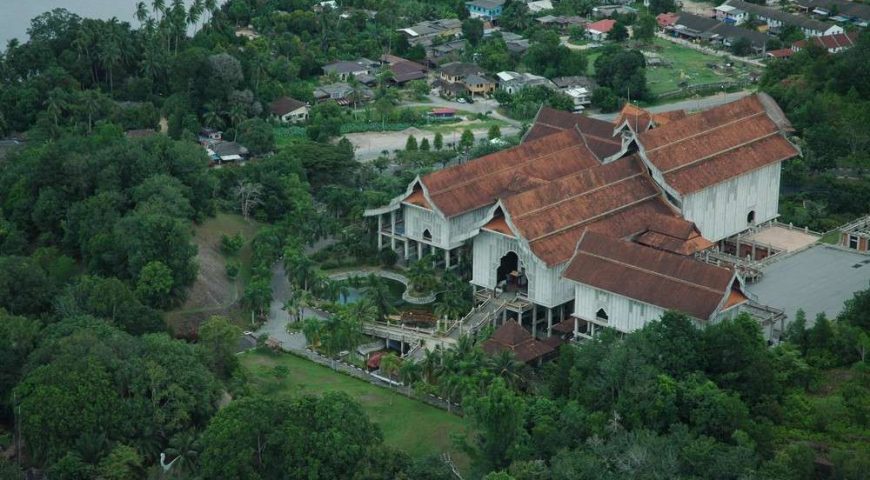 With bragging rights as the largest of its kind in Malaysia and Southeast Asia, it too can be considered be one of the most beautiful buildings in terms of architecture. Based on old Terengganu palaces, with its distinctive peleleh or sloping roof, the many design elements derived from the past make this building an attraction in itself.

The Museum has a floor area of over 75,000 square metres spread over four interconnected buildings. The whole museum compound covers an area of 27 hectares that also includes outdoor displays of old maritime vessels and old palace buildings, such as the rumah tele and reconstructed old homes depicting traditional Malay architecture.

The famous Terengganu inscription stone or Batu Bersurat is displayed here. It was by discovered by Syed Hussein Ghulam Al Bukhari in 1902 at Kampung Buloh, Hulu Terengganu,. The ‘Batu Bersurat’, stone depicts jawi writing, which is considered the earliest evidence of the coming of Islam to the Peninsula, vene predating the founding of the the Malacca Sultanate.

The museum houses a diverse range of century old artifacts and artworks which include textiles, historical artifacts, crafts, royal regalia, Islamic arts and contemporary arts, and weapons. The story of old and new Terengganu also includes modern day exploration of petroleum. An interesting facet of the museum is its huge outdoor display area that doubles up as a peaceful and quiet landscaped garden in which visitors can stroll at their leisure.

Here you will see the maritime history such as Terengganu’s sea faring trade, marine galleries and real century old homes and palaces, such as rumah tele, one of which King Mongkut of Thailand had once stayed on his visit to the State in 1908.